IN THE FOOTSTEPS OF HIS FATHER: PRESENTING JOHNNY WHITE

“My dad was my inspiration,” reminisces Johnny White, “I remember going to the radio station to hear his quartet sing live. At age 5, I knew what I wanted to do in life.” And what he did with his life was follow in his father’s foot-steps.

There isn’t a specific time when the rhythm within Johnny was record-ed, but he recalls “going around the house, listening to the radio and playing rhythmic [beats] onto the chairs,” he concludes, “because we didn’t have a lot of money [for instruments]. His father encouraged his passion for music but instilled in him to work hard because through hard work, success would come. “My father would say that whenever you do, give the customers more than what they are paying for…exceed client’s expectations.”

From far back as he can remember, Johnny performed at various talent shows. Even while in elementary school, his resume for entering talent competitions was vast and was even longer, by age 14. In high school, with him as trumpet player, he started a band called “The Fabulous Flames”, which was a spin-off of James Brown’s “The Famous Flames”. He was the trumpet player, along with a sax player, a trombone player, three horns (called the rhythm section), a drummer, a lead guitar and a bass player, and of course, two beautiful female singers.

After the band was formed, Johnny’s father encouraged him to attend a particular showcase in Charlotte, so that he could scope out the competition of the other bands. At the competition, he learned of Ted Hall with Hit Attractions, the Rolls Royce of booking agents. Johnny noticed that he was the sponsor of the event and wanted to talk with him. He contacted Ted and was told to come to Charlotte and audition for him. So, he and his band auditioned and were booked.

For almost three years, “The Fabulous Flames” traveled every-where. They enjoyed the ride, until Johnny graduated from high school. His father wanted him to graduate from college, even though his band had been successfully traveling the country. The group dis-mantled and Johnny attended North Carolina College at Durham, what is now North Carolina Central University. He received a full scholarship and majored in his passion, Music.

Johnny’s desire to perform music never left him. In his freshman year, he met Willie “Papa” Stone, a college employee, who was looking for an addition to the “Shamrocks”, a band consisting of professional people he managed. The new addition would sing and play for the group. Johnny made the band. This was the start of his career as a singer and as the only student in the band. During his stint with the group, Johnny learned the foundation of being a great entertainer. He learned how to be a sharp dresser, always have his shoes shined, give a good visual performance, but most importantly, always be punctual and take care of business. After performing with the “Shamrocks”, Johnny, in his sophomore year, created his own band called “The Lee Darvis Orchestra”, dedicated to a member of the group. The band consisted of 5 horns, 2 saxophones, a trumpet, a trombone, a guitar, a bass, drums and a keyboard, while Johnny sang out front.

Upon graduating from college, he applied for and received a position in Long Island, NY as the Director of Choral Music. His roommate applied for and received the same tided position in New Jersey. Although his roommate stayed at his position until retirement, Johnny only stayed in New York for a year He had an overwhelming passion to do gigs, so he contacted his friends still living in North Carolina to help him get back into the circuit Johnny recalls the reason he came back to Durham, as opposed to Detroit (where Motown was located), “Durham was a musician’s

Johnny White learned the foundation of being a good entertainer early in his career. He demonstrates his showmanship when Johnny White & The Elite Band performed at the 6th Annual NC Juneteenth Celebration in downtown Durham June 2010. 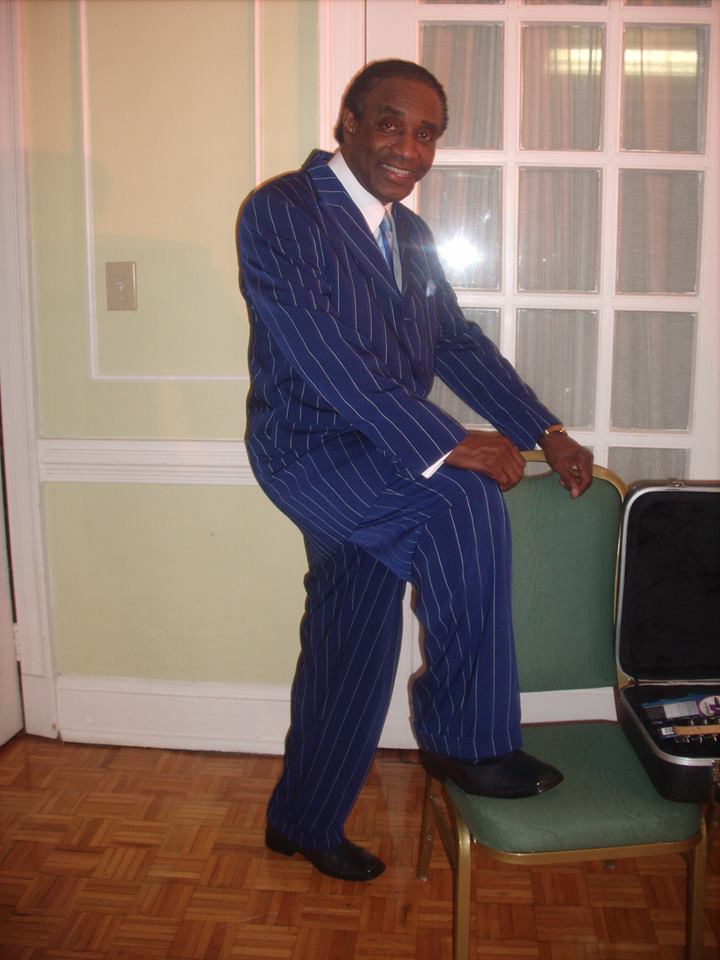